The growing number of driving aids and safety systems, many of them mandatory for European vehicles from next March, are being used as marketing claims in which there is talk of a automation in functions that, according to Insurance Institute for Highway Safety (IIHS, for its acronym in English), responsible for road safety in the United States, is not such.

But the IIHS is not the only institution that has formalized its opinion on the electric car and that is regulating the technical requirements necessary to consider a vehicle autonomous. In the UK, a parliamentary committee is laying the foundations for the future of these vehicles in his country. In both cases, a complete automation of the automotive sector in the near future is called into question.

“Despite misleading messages from some manufacturers, at least for now, no self-driving cars available for consumers.” The words issued in a statement by the IIHS could not be clearer. The highway safety agency has announced that is working on a new manual to establish what an autonomous car is and what requirements manufacturers will have to meet in order to sell them as such. 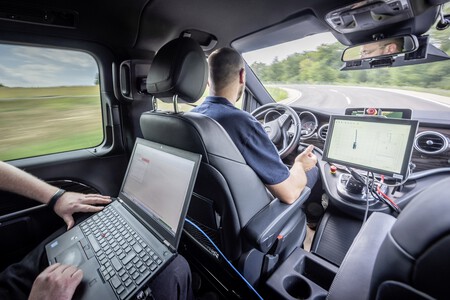 The statement also notes that current ADAS systems “may make long journeys seem less of a burden, but there is no evidence that they make driving safer. In fact, the opposite may be the case if the systems lack the adequate safeguards,” in the words of David Harkey, president of the IIHS.

To support this statement, the IIHS clarifies that when a human being uses the automated functions of their vehicles, they are more likely to reduce attention that lends itself to the road and that, therefore, the safety on board decreases. A situation that the IIHS wants to put an end to, as we will see later.

And in the same line in which the IIHS is working, the British Parliament is also doing it. The commission in charge of establishing a regulation for the autonomous car has pointed out the need to establish a clear line between “driving aids” and “autonomous driving”, since they consider it proven that with greater automation of maneuvers, the driver’s relaxation also increases and the chances of him taking the necessary measures to avoid an imminent accident are reduced.

Hands on the wheel and eyes on the road

With the aim of improving road safety, the IIHS will demand a series of technical requirements and slaps manufacturers, whom it accuses of having “overestimated” the capabilities of their systems and of offer an unrealistic image to drivers. In the statement they claim to have documented cases of accidents in which drivers watched videos or played with their mobile phones and even slept at the wheel with active driving assistance systems.

{“videoId”:”x83e936″,”autoplay”:false,”title”:”These are the levels of autonomous driving for cars”}

Therefore, the technical criteria that will establish the degrees of automation of the vehicles will have to comply with the following requirements:

All these requirements will be taken into account for a good grade for Consumer Reports, a magazine specialized in consumption in the United States, who will evaluate in their next investigations the operation of the autonomous systems of each vehicle.

Some doubts that are also shared in the United Kingdom

That an institution questions the effectiveness of ADAS systems is not new. In 2018, Euro NCAP It has already launched notices very similar to those that the IIHS has put on the table. Now, in the United Kingdom, they aim to establish what is meant by an autonomous car or what is the responsibility that can be attributed to the driver if an accident occurs, among other scenarios of a future that is yet to come.

In fact, the commission in charge of the future of the autonomous car in the British parliament recommends don’t talk about autonomous car unless it is capable of driving safely by itself without the need for human intervention of any kind, not even on the movements that the car is making or the state of traffic.

Meanwhile, the commission’s report speaks of “transition demands” or “transition demands.” In these cases, the vehicle acts autonomously but requires the driver to remain alert to take control of the vehicle if necessary, using visual, audible or haptic alerts to demand their attention. In these cases, the car cannot be considered an autonomous vehicle, since “it is not realistic” that a driver who is not paying attention to the road can act correctly in an emergency.

“It is important that misleading advertising don’t confuse people and prompt them to think that they do not need to pay attention to the road. We recommend new demands for those who market autonomous driving functions”, can be read in the same report.

This new scenario will need redefine legal obligations current mobility issues. For example, the British report encourages the development of a new law that takes into account factors such as who is responsible in the event of an accident with an autonomous vehicle involved, a clear and concise definition that establishes a definitive line between aid to driving and autonomous driving or the creation of regulatory bodies that standardize whether or not a car can act autonomously.

Autonomous car looking for a driver: the legal battle to redefine it and set limits

was originally published in