You know those chicken-and-egg dilemmas where you never get an answer? This is likely to be one of those enigmas, as the market, especially that of stocks, cryptocurrencies and government bonds, seeks to anticipate the decisions and movements of Central Banks.

First, a brief introduction to the Federal Reserve (Fed). Yes, it is the US Central Bank, therefore responsible for overseeing and ensuring the stability of the financial system.

Who puts coins into circulation or issues debt bonds is the National Treasury, but the US government practically gave a “blank check” to the Fed to buy debt securities.

In short, in practice, the Central Bank manages to “keep tempers” when banks, or the market itself, start to demand large discounts to roll over corporate debt.

Think of this move as an “anabolic”, distorting reality and providing peace of mind so that the market has confidence to produce, invest, take out loans, etc.

The Federal Reserve is not the central bank of the world, but it is normal for the European Central Bank (ECB) and the BC of Japan to follow the same trend adopted by the greatest economic power in the world. This, in part, is due to the strength of the US Treasury Bonds, which make up a large part of the reserves of other countries.

Below is a graph of the 5-year Treasury Bond interest rate (blue) next to the Chicago Board of Trade soybean price (orange).

Now let’s move to another segment that is completely independent and indifferent to the price of soybeans: the shares of the automaker GM. 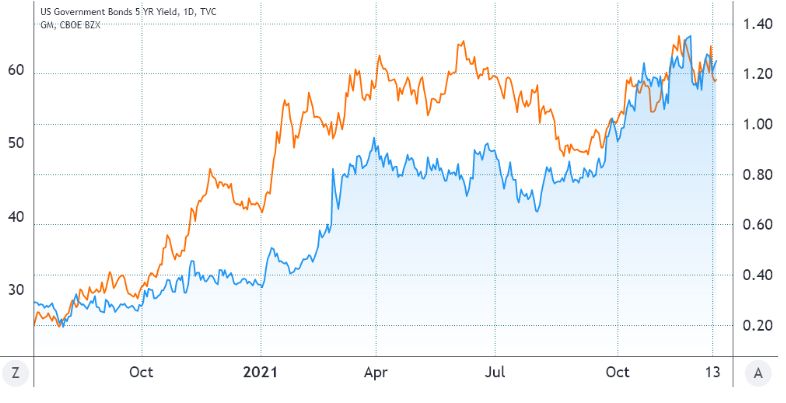 In other words, it is clear that it is not the assets that are appreciating, but the dollar that is losing strength. Of course, not everyone rises at the same rate, and nothing saves crap like Peloton ($PTON), a company that installs iPads on exercise bikes and magically hit a $64 billion market cap in early 2021.

In reality, it all goes together: when markets signal they are going to collapse as banks are afraid to lend, and companies in turn start laying off, the Federal Reserve throws the benchmark interest rate on the ground and accelerates bond buybacks. debt to exit the banks and hedge funds.

In other words, politicians receive donations and invitations to “lectures” from large companies, which depend on the heated market. The incentive is totally crooked because they are shitting pro holders of the Treasury Bonds, or for people who cannot buy stocks and real estate to protect themselves from inflation. Skip out! Buy Bitcoin.