It’s a great idea that Ikea now incorporates into its catalog. The curtains are initially designed to cover the vision and light from the outside, but there are also curtains like the new ones from Ikea, capable of damping and absorbing sound.

The new Gunnlaug curtains are designed to “dampen echo or reverberation in medium and high frequency waves, such as the sound of dishes or cutlery”. It is not a promise on the air, because according to Ikea they have ISO 354 certification and they claim to have a 50-100% higher absorption capacity for high and medium frequency sounds, compared to other fabrics.

If you are looking to isolate yourself from noise at home, the new Ikea curtains will help you

Either because of the noise in another room or because of the cars on the street. Isolating yourself from noise is often quite pleasant. Hence, noise-canceling headphones have become so popular in recent years. However, we do not always need so much insulation nor do we have to want to wear helmets. As an alternative, these curtains capable of absorbing noise are presented. Ikea has launched its new model with this addition, but there are already other alternatives on the market.

What muffles the sound? According to Ikea it is by the combination of chenille yarn and the special braiding of the fabric, which makes the curtain absorb sound.

These curtains, like most, also filter light and can be hung from either a pole or a rail. Yes they aim that to obtain the best result in terms of absorption is when the folds are formed 9-15 centimeters from the wall. Leaving these folds between the wall and the curtains is where Ikea has calculated that better figures are obtained.

The model that is sold in Spain has a length of three meters, with a width of 145 centimeters and a weight of 1.20 kilograms. They are divided into two units that are sold for an official price of 59 euros, from the Ikea website in Spain and in two colors: white or gray. 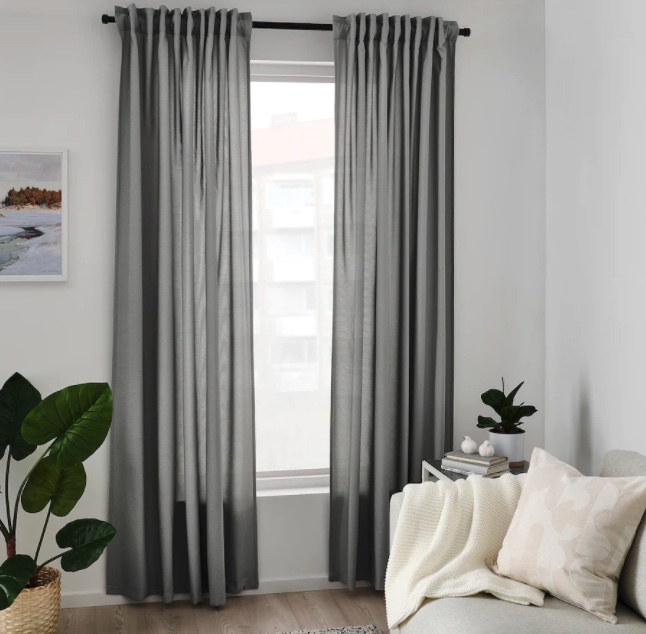 In 2019, Ikea itself showed its curtains capable of purifying the air and eliminate bad odors from the home. Different solutions for a widely used household item.