During a bull market, people all the time wonder if it’s over, especially in times of correction where the investment thesis is tested by the market, in addition to its own emotional one.

It is necessary to separate the Bitcoin Economy by periods and thus walk in accordance with them. We know this and I have talked a lot about the short term and its volatility, this is something that will continue to happen and if you want to stay alive in this market, you need to get used to it.

The long term is a clear and well-defined trend. Correction moments just sound like noise and passing opportunities to those who were prepared.

When we talk about Bitcoin and its cycle, we are following the core behavior around the ecosystem, as the only extreme actions are buy/sell Bitcoin. At some point, when performing any of the actions, your participation will be seen within the chain.

There is a pattern in time in relation to post cycles. Halving. The following year post Halving in 2013/2017 it defined the Bitcoin high journey, with December being the month for the top end of the cycle.

By following this pattern, it is expected that the top end of the current cycle would be reached later this month, ending the high Bitcoin market at the turn of the year to 2022 (just as it was in 2013/2017).

Behold, a big doubt arose! It’s mid-December and the price of Bitcoin is -30% from its last all-time high ($69,000), meaning is the Bitcoin bull cycle time out? -I would say no! 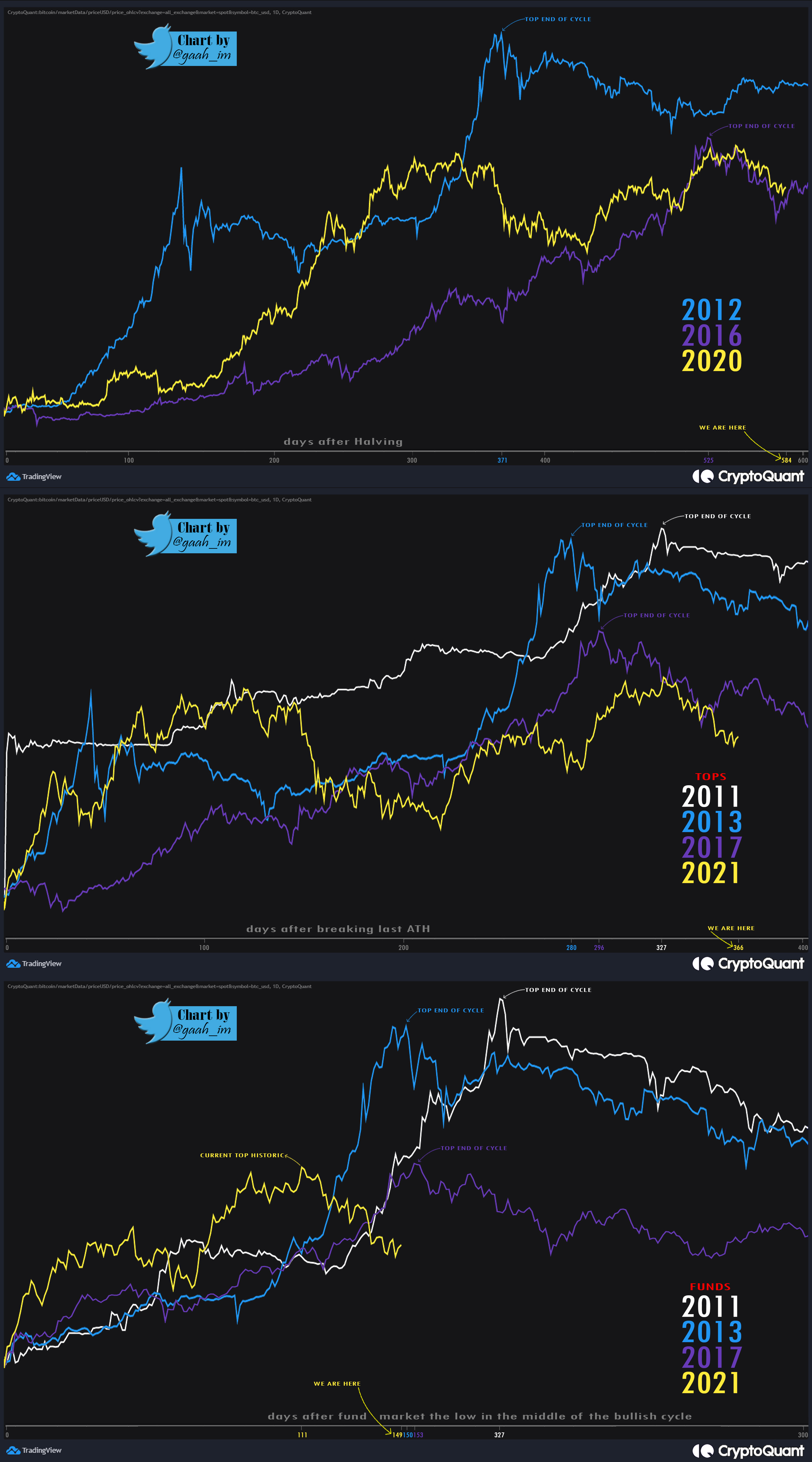 I recently published a text about “Super Cycle” and why Bitcoin is still going to skyrocket. At this time (November 10) the metrics presented in relation to time already showed the current cycle to be of greater duration in relation to the previous ones.

Just for this factor, we can already rule out that the time is up for Bitcoin to continue to rise, but we will still study a little deeper the central behavior to be observed in an end-of-cycle top, in addition to knowing how long this cycle is already the longer.

In the last article published I updated the main metrics that signal market top. The current moment is not top of the market. Be sure to check it out to follow the context going forward. 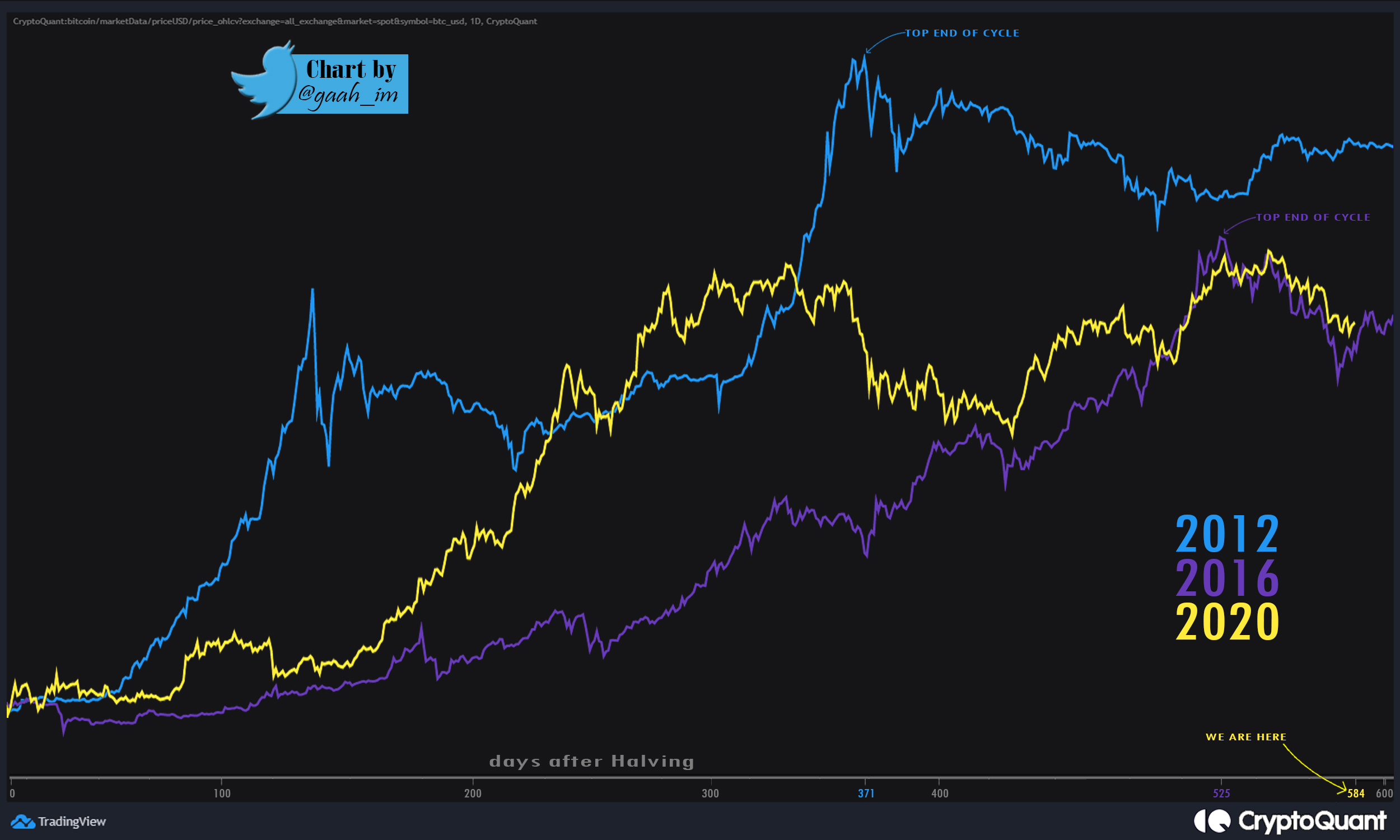 From the comparison starting the high Bitcoin market after the event Halving, the current cycle is the longest following the lengthening pattern as it was in 2017 compared to 2013.

The variable in question (Time) extends cycle after cycle as the market in general is growing, so the price spends much more time in accumulations and not in a defined trend.

Now, there are many more players standing in the long term. Bitcoin offer draining powder Halving more and more, in the search for liquidity, there is a large exchange of hands, as those who sell with fear and loss are the same ones who do not buy the fund.

Changing hands is not so simple and fast. That’s because there is the emotional factor counting in the game and in addition to breaking the totally optimistic feeling, it takes time to restore it. 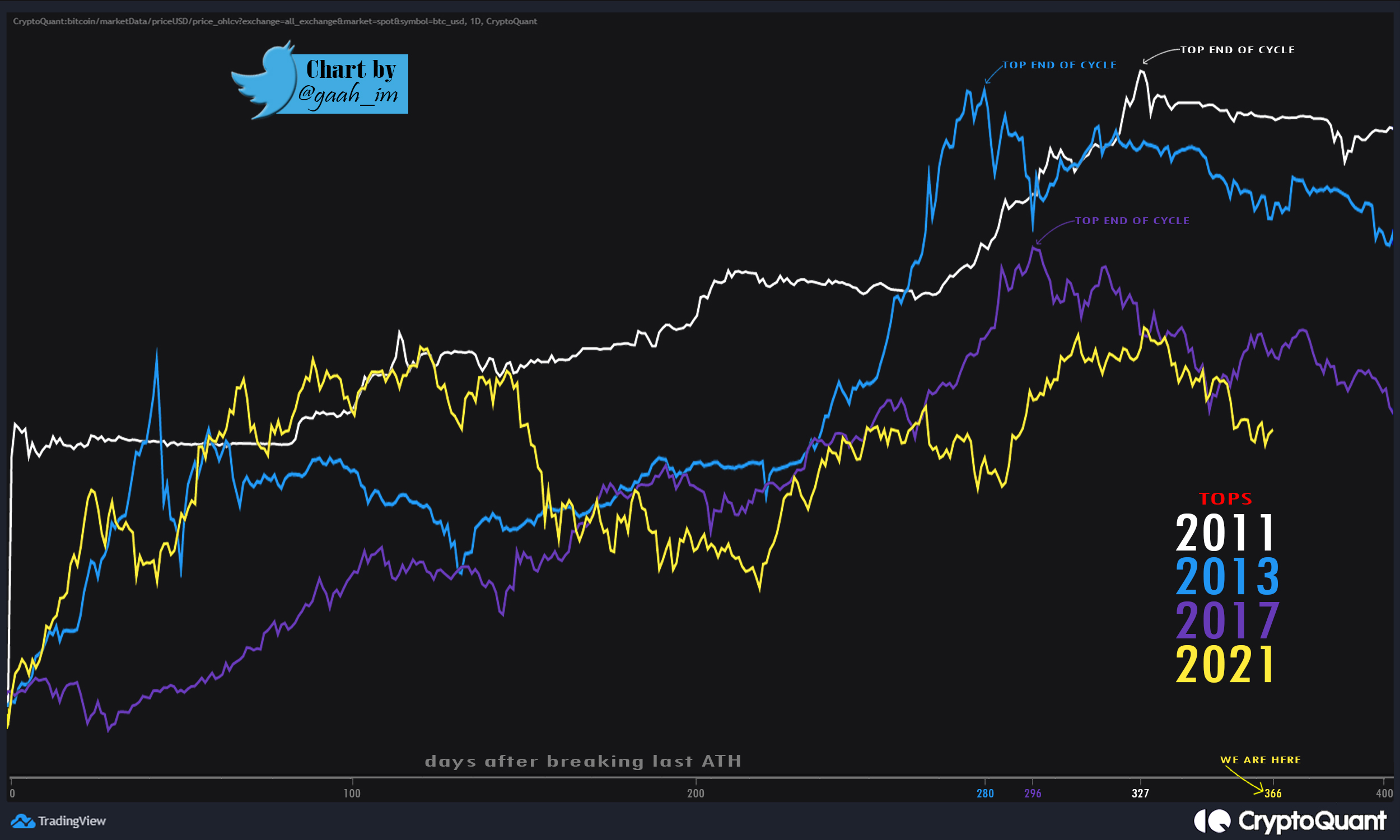 From the last break All Time High starting the high cycle, it is also observed that the current cycle is the longest compared to the previous ones, in addition to that, from 2013 onwards, the behavior is repeated and the cycles are longer.

The 2011 cycle was the birth of Bitcoin, the 1st had not yet happened. Halving, but the first move was bull market, effecting the beginning of the cyclic sequence. 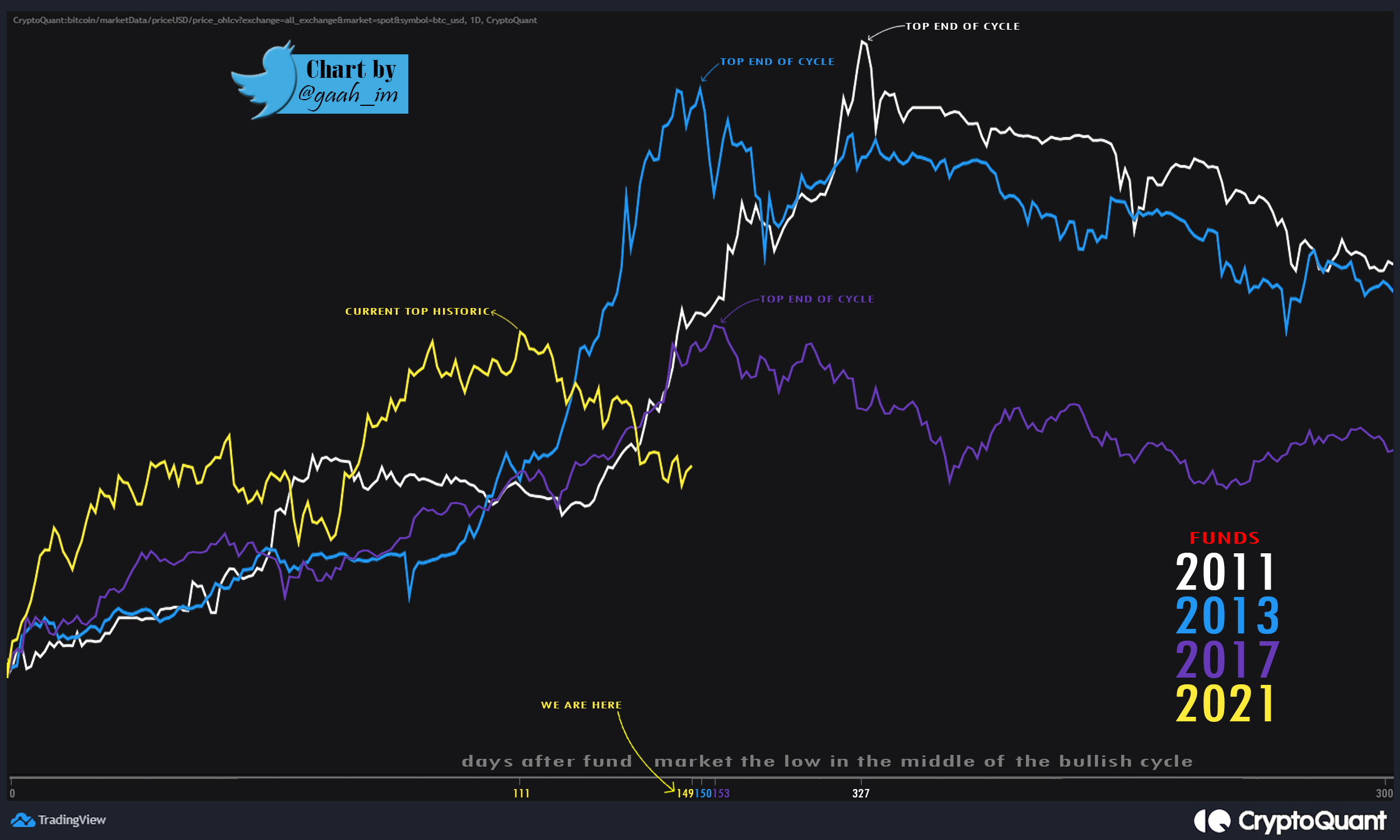 Taking into account that the current moment is the middle of the high Bitcoin market, the minimum fund presented in this cycle and historically for comparison purposes shows that there is still time for the extension to continue to occur.

The pattern was repeated in all optics, because this one would be different?

2017 was a little longer than 2013 (only 3 days). Yea! It is practically the same duration, but in the current cycle it is already 149 days (very close to the previous ones).

The important point to note is how long the last Bitcoin record in the current cycle was broken, at 111 days from the low.

It is shorter than the historical duration and if the pattern repeats according to the expanding market fundamentals, the current cycle should go beyond 327 days (duration of the first Bitcoin movement in 2011).

By my count, there is still twice as much time since the bottom for the price to move, that is, it is the birth of the post correction uptrend in the middle of the bull market Bitcoin.

The current cycle is different! Therefore, time is not over but extends in historical relationship for several fundamental factors in the expansion of the cryptography market.

The top will be signaled by historical behavior within the chain and not based on the weather forecast. The focus should always be fundamental, taking into account the historical movement to define the cyclical moment.

Concentration should be here and not on short-term noise. Bitcoin price direction is unique and not down!