After a 2021 where the indices advanced incessantly, this 2022 began with setbacks. However, the correction of 10% of NASDAQ 100is not what it seems and the chances of a recovery are no different if I had not corrected according to Mark Hulbert en Market Watch.

This is important to keep in mind now that the Nasdaq COMP Composite Index is rapidly losing ground, a 2.5% lower on January 13 alone and 7.8% lower than its closing high on November 19, 2021.

Analyzing all the occasions since 1928 in which the S&P 500 (or its predecessor index) fell at least one 10 %from a previous high, in some cases continued to fall and entered bear market territory by falling at least one 20% from a maximum From the market. In others, it almost immediately turned around and went back up. 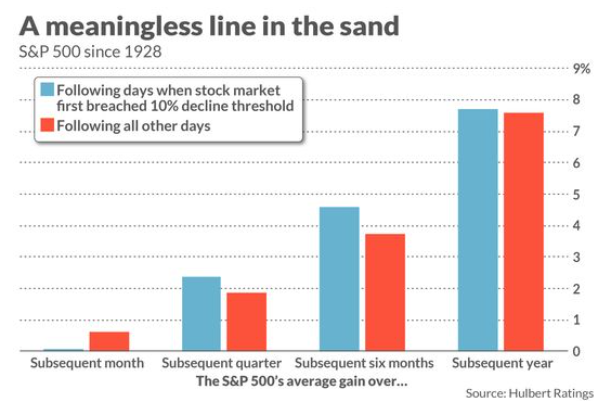 To calculate the overall market odds on all of those occasions, the exact days on which the S&P 500 first broke the 10% threshold were plotted. In those days there was no way of knowing if the market crash was almost over or if it was the start of something much worse. The chart above reports the average gain for the S&P 500 in the weeks and months after these particular days.

None of the differences plotted on this graph are significant at the 95% confidence level that statisticians typically use to determine whether a pattern is genuine. In any case, keep in mind that the average stock market return is typically higher after the days when the stock market first passes above the 10% downline.

It could be that these results are biased by some outliers. To test that possibility, market odds were calculated in a different way: the percentage of time the market was higher during the subsequent month, quarter, six months, and 12 months. The following table reports the probabilities calculated in this second way. Once again, none of the differences are statistically significant. 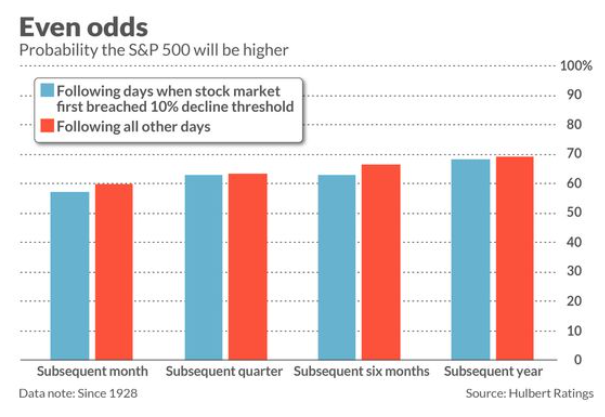 What explains these results?

The stock market is prospective. The level of the market at any given time already reflects all currently known information. That includes how the market has behaved up to that point.

As an illustration, let’s imagine that breaching the 10% drop threshold actually indicated that the market outlook had suddenly deteriorated. In that case, investors would immediately sell shares on such a default, pushing prices down even further until the market breaks even. This is how market efficiency works. The net effect would be that the threshold would become meaningless.

“What does all this mean for the next time the market breaks through this 10% threshold? If you’re looking back, you may regret a 10% decline. But as an investor, looking ahead is what you want to do.”