The International Anti-Poaching Foundation’s (IAPF) Akashinga program will invest an additional US$5 million into consolidation and expansion of its wilderness portfolio this year as it embarks on a major drive into protecting new landscapes across Africa, entering into partnership agreements in three more countries .

More than 500 IAPF staff are a part of the Akashinga program in Zimbabwe, helping to protect 1.3 million acres across the Zambezi Valley. In 2022, the IAPF signed agreements in two new landscapes as it expands towards 1000 staff across 8.5 million acres, with a goal of 15 million acres under contract by 2026, and 30 million acres by the end of the decade.

IAPF CEO Damien Mander said the organisation has expanded its on-the-ground management and support into Mozambique, which will include a shift into marine conservation, and Botswana this year, with negotiations also taking place in Tanzania.

“We are at a time in civilisation where we are confronted with major challenges, the biggest we have ever faced. To meet these threats head on, we need big solutions, and this is the reason the IAPF is scaling to protect some of the largest tracts of vulnerable wilderness on the African continent,” Mr Mander said.

“Nature is this planet’s greatest self-regulating mechanism. It has evolved over billions of years and is a system we must value with the greatest of priorities if we are to combat the climate crisis and further pandemics.”

The IAPF has been identifying large-sale wilderness landscapes which have significant sections at risk of being lost. By engaging local government and communities, long-term leases are structured for these areas which provides security for decades into the future, he said.

“Conservation is not just a conservation issue. It is a social issue and when we work with the local communities to help prosper their own strategic development plans, we have conservation outcomes in the areas we seek to protect,” he said. “The empowerment of women is central to this community development support strategy.”

In 2017, leasing a large wilderness area that was left abandoned in the wake of a diminishing trophy-hunting industry, the IAPF set out to transform conservation by employing marginalised women from local communities as wildlife rangers. Akashinga, which means The Brave Ones in the local Shona dialect, was borne and scaled to patrol and protect 11 areas in total in Zimbabwe by 2022.

The team, working across Zimbabwe’s Zambezi Valley has helped contribute to a reported 90 per cent reduction in elephant poaching in the region the IAPF operates. In the 16 years before the initiative began, this area, which is home to one of the world’s largest remaining elephant populations, had lost 8,000 elephants to poaching.

There has also been an almost 400 percent increase in wildlife populations in the pilot area of ​​Hurungwe where Akashinga started.

To date, the Akashinga rangers and their investigations teams, working alongside local agencies have made 1154 arrests for 662 wildlife offences, which have carried a conviction rate of 84.5 percent.

In 2021 in addition to successful anti-poaching operations, in Binga a scholarship program was launched which will benefit 250 underprivileged children and 50 female entrepreneurs were part of a small business development program, generating revenue for local communities.

Other development programs included road construction and maintenance, access to clean water, and infrastructure such as a town hall in Hurungwe for the community. A strong emphasis has been placed on healthcare where clinics have been rebuilt, restocked and staffed, treating thousands of patients.

Akashinga ranger Senzeni Munsaka, 36, grew up in the village of Lunga on the shores of Lake Kariba in northern Zimbabwe, and like so many women there, life was a real struggle. Her husband didn’t work and the mother of two used to sell fish to try to make ends meet.

Almost two years ago she joined the IAPF as part of the first intake of recruits in Songo, before graduating as a ranger. While she initially found the physical training difficult, she’s learnt new skills and is now able to support her family.

“Since I joined the organisation, I have been relieved from the hardships that I faced before. Now we are living a better life as a family. I am now able to pay school fees for my kids and pay for my own things,” Ms Munsaka said.

“When we first came here, elephants were not seen but now we can see elephants. We also see animals like buffalos and impalas,” she said.

Tyunga Ward Councillor Super Muzangili said: “After many years of limited support for conservation in the region, the IAPF’s efforts in collaboration with Binga Rural District Council and the local community are hope towards a positive future. We are proud to see the women of Akashinga leading the way forward.”

Supporters will double their impact after a donor committed to matching every dollar raised up to US$10 million until December 31, 2023. To make twice the difference visit www.iapf.org/donate

Founded in 2009, the International Anti-Poaching Foundation (IAPF) has transformed the traditional adversarial approach to conservation into an innovative and empowering model to protect wildlife and habitats. The IAPF connects, protects and restores landscapes, working together with local communities, governments and NGOs, through their Akashinga conservation model, featuring all-female teams of wildlife rangers in Africa. The Akashinga program trains and deploys local women into ranger roles, while addressing the broader needs of surrounding communities, including education, clean water, healthcare and infrastructure development . The IAPF employs more than 500 staff across 8.5 million acres in Southern and East Africa, and the goal is to expand to 1,000 women protecting 15 million acres of wilderness by 2026. The IAPF also operates the internationally recognised ISO 9001 certified LEAD Ranger program, which delivers tailored training, long-term support and mentoring to develop wildl ife crime enforcement leaders and instructors who remain based in the ecosystems they are protecting.

IAPF Founder and CEO Damien Mander, 42, is an Australian-born environmentalist based in Zimbabwe. In 2009 while travelling through Africa post military service, he was inspired by the dedication of rangers and the plight of wildlife. Liquidating his life savings, the International Anti-Poaching Foundation was established to protect nature. Damien later co-founded LEAD Ranger, and in 2021 he co-founded the Conservation Landscape Alliance, a collective of organisations working together to achieve landscape-scale conservation in the community-owned wilderness areas of Africa. He is the winner of the 2019 Winsome Constance Kindness Gold Medal, a prestigious international recognition for services to animals and humanity. 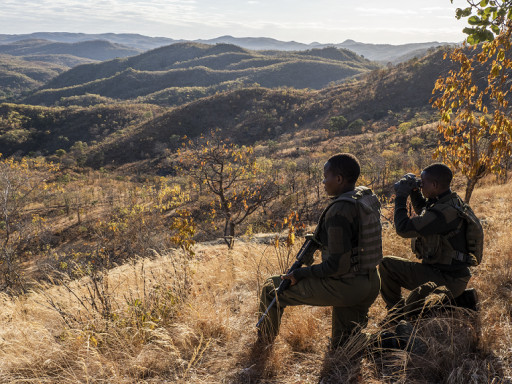 Akashinga rangers on patrol in Zimbabwe

This content was issued through the press release distribution service at Newswire.com.