Russian forces are shelling the last Ukrainian strongholds in the Lugansk region in their offensive in eastern Ukraine, the scene of an intense battle raging mile after mile. Western military experts believe that Vladimir Putin’s troops have made steady and increasing gains in recent days’ fighting in the eastern part of the country, although they believe that Ukraine’s defenses remain generally effective.

The fence tightens on the Ukrainian stronghold of Severodonetsk, which has become the center of heavy fighting in the east, and where the bombing, according to the authorities, does not stop. Its mayor, Oleksandr Stryuk, has claimed a Russian “reconnaissance and sabotage” group has entered a hotel on the outskirts of the city. The fighting continues and the Ukrainian forces, at the moment, do not control the vicinity of it, according to the governor of Lugansk, Sergei Gaidai.

Severodonetsk is one of the main urban centers of Lugansk, it is still under Ukrainian control and is considered key to the control of this region of Donbas. Russian forces have tried to isolate it from the rest of the territory controlled by the kyiv government. Analysts believe they have been steadily advancing around the city and will continue to try to complete their capture in the coming days.

“Severodonetsk is being attacked from several directions at once. The occupiers cannot pass through the defenses, the fight continues,” Gaidai wrote on Telegram this Friday. Lugansk’s governor has repeatedly accused Russian forces of wanting to wipe the city off the map by subjecting it to chaotic shelling, destroying residential buildings and killing civilians. “The residents of Severodonetsk have forgotten when was the last time there was silence in the city for at least half an hour. The Russians are hitting the residential neighborhoods relentlessly.

Gaidai has assured that the Russian forces are located in two thirds of the perimeter of the city and that it is not yet surrounded. According to the Ukrainian authorities, at least 1,500 people have died and about 13,000 remain in the city, where they say that about 60% of the buildings have been destroyed and will have to be rebuilt.

In its latest intelligence update, Britain has said Russian ground forces are continuing their attempt to encircle Severodonetsk and neighboring Lysychansk, recently capturing several towns northwest of the town of Popasna, south of both cities. “Russia is pressing the pocket of Severodonetsk even though Ukraine maintains control of multiple defended sectors, denying Russia full control of Donbas.”

The governor of Lugansk has stated this week that Russian forces have seized 95% of the territory of the region. “The situation in Donbas is extremely bad. The Luhansk region continues to hold back the horde, which is destroying our villages. The bombings do not stop at all”, wrote the also head of the military regional administration. 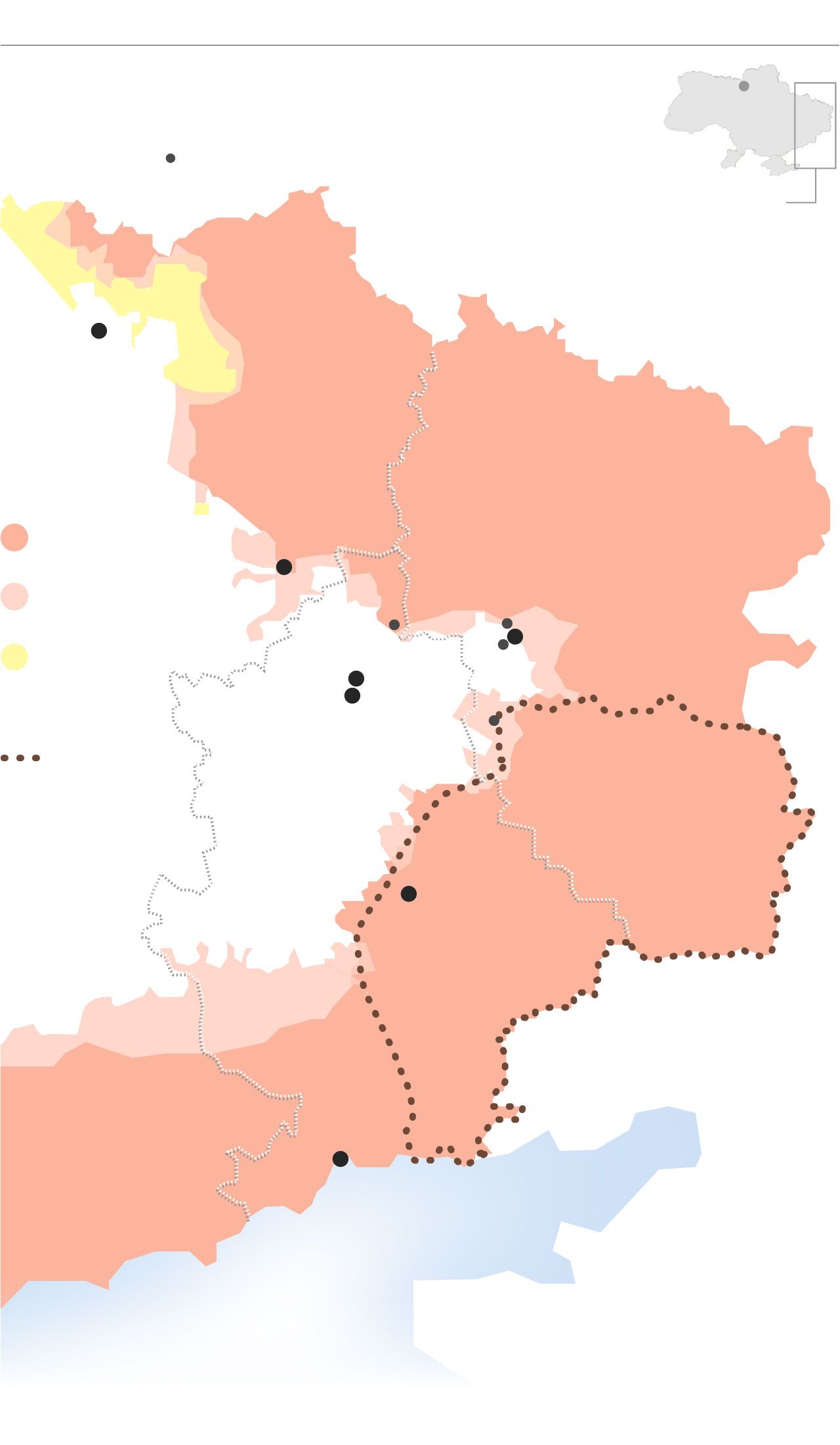 The offensive in eastern Ukraine

Areas in which Ukraine has regained control

Separatist region prior to the Russian invasion

In Donetsk, the other Donbas region, Russian-backed rebels have claimed they have taken control of Liman with artillery support from the Russian armed forces, in a statement using the city’s Soviet-era name, Krasny Liman. The Ukrainian authorities have not confirmed such a capture, but Pavlo Kyrylenko, head of the Donetsk military administration, has admitted to the Ukrainian media Hromadske that especially hard battles are being fought in the direction of Limán and most of the city is not controlled by the Ukrainian military.

“But I want to underline that the pulse, at least from a geographical point of view, is still small and, in a way, getting smaller, since we are now talking about smaller cities and towns,” he said, explaining that they are noting an attempt to encircle Ukrainian forces on a smaller geographic scale, using smaller units to pursue smaller targets. “But they’re still doing it in a pretty doctrinaire way, using artillery fire up front and then, and then moving units only after they feel they’ve softened up the target enough.”

A spokesman for the Ukrainian Defense Ministry has described in recent days the territorial gains of Russian troops in Donbas as “temporary successes”, but the kyiv Army is carrying out a “maneuver defense” in certain areas of the front. “They change position, withdraw and make counterattacks under favorable conditions.”

After encountering unexpectedly fierce resistance and logistical problems, the Kremlin abandoned its operations around kyiv more than a month ago and has concentrated on Donbas, the industrial region of eastern Ukraine, where pro-Russian separatist territories recognized by Russia are located. Putin and the scene of an armed conflict since 2014. It is believed that with its offensive Russia is trying to capture all of Donetsk and Lugansk. Analysts at the Washington-based Institute for the Study of War say Russian forces have made several gains in the past week, but their offensive operations remain slow. “Russian forces are very degraded and will have a hard time replacing new losses.”

Artillery has also hit the northeastern city of Kharkiv, where Ukrainian forces have carried out a counteroffensive in recent weeks to try to keep troops away from the Kremlin. A Russian shelling on Thursday killed nine people, including a father and his five-month-old baby, while 19 were injured and are still receiving medical care, according to Ukrainian authorities.

Associated Press reporters they have seen the bodies of at least two dead men and four wounded in a subway station, where the victims were transferred while the shelling continued outside. According to the Ukrainian Army, in this area, the Russian forces are trying to keep the positions occupied and restrict the advance of their troops.

Reinforcements on the border with Belarus

The authorities have also denounced this Friday at least 10 dead and 35 wounded in a Russian missile attack in the Dnipropetrovsk region, to the southeast, while the Ukrainian armed forces have reported that measures are being taken to reinforce the protection of the border with Belarus. “The threat of missile and air attacks from the territory of the Republic of Belarus remains,” he says in his last part.

This Thursday, the kyiv Army confirmed that “tactical exercises” by units of the Belarusian armed forces are being carried out in the Belarusian region of Brest. “It is possible that after completing this three-week training, these personnel may be involved in hostilities in Ukraine,” Oleksandr Motuzyanik, a spokesman for the Ukrainian Defense Ministry, said on Friday.

The Russian invasion of Ukraine has left a trail of destruction in its wake, forcing millions to flee and claiming thousands of lives. The Office of the United Nations High Commissioner for Human Rights has confirmed that at least 4,031 civilians have been killed, more than 200 of them minors, since the beginning of the offensive, and a slightly higher number of wounded. However, it is assumed that the real figures are higher.

Our newsroom has been focused for weeks on covering the war and its consequences for all of Europe. We are making a special effort to report, explain and verify available information in difficult circumstances and have sent our reporters to Ukraine, Poland and Moldova, among other key locations. We tell you concrete stories and try to give you an overview of the economic and political effects in the medium term, looking for the most expert voices to interview in Ukraine, Russia, the United States or China.