The Government finalizes the new regulation of Coasts that must prevent occupations of the public land at the foot of the sea for more than a century. The draft of the new standard –Which has already been released to public information– eliminates the possibility of extending the permit for some constructions beyond 75 years, as happened with the ENCE factory in the Pontevedra estuary in 2016.

The Spanish coastline, of some 9,000 kilometers, has been an almost irresistible claim for urban planning based on homes, businesses or factories based on a particular – and exclusively – use of public goods: the so-called occupations.

This attraction has created “a lot of disorder” on the coast, according to what the vice president of Ecological Transition, Teresa Ribera, explained to elDiario.es. The draft limits the authorization of those occupations of houses, hotels, restaurants or other constructions for many of which the 2013 Coastal Law reform had created an extra period of up to three-quarters of a century.

Although the limitation of occupations is the star point, the regulation also expands the protected elements that will be considered maritime-terrestrial domain, vetoes more infrastructures on the coastline and prohibits activities previously allowed. The objective of the norm, he says, is to guarantee “the public use and enjoyment and to ensure its conservation and the protection of its natural characteristics.”

The coasts are a public good because it was established by the 1978 Constitution, which mentions “the maritime-terrestrial zone, the beaches and the territorial sea.” So “beaches, dunes, escarpments, berms, cliffs, marshes or coastal wetlands are public domain both for their protection and for their enjoyment,” according to the Ministry of Ecological Transition.

What the text prepared by the ministry does is repeatedly insist that the maximum time that a private occupation of the coast can last is 75 years, counted from when it is authorized for the first time and including “all extensions.” Up to six times throughout the article it reiterates that total term. It is the key to closing, in theory, the door to concessions that could last even a century. The 2013 Coastal Law amendment opened the door to extend the life of tens of thousands of properties whose authorization was to expire in 2018 (after at least three decades of exclusive use of the public coastline). 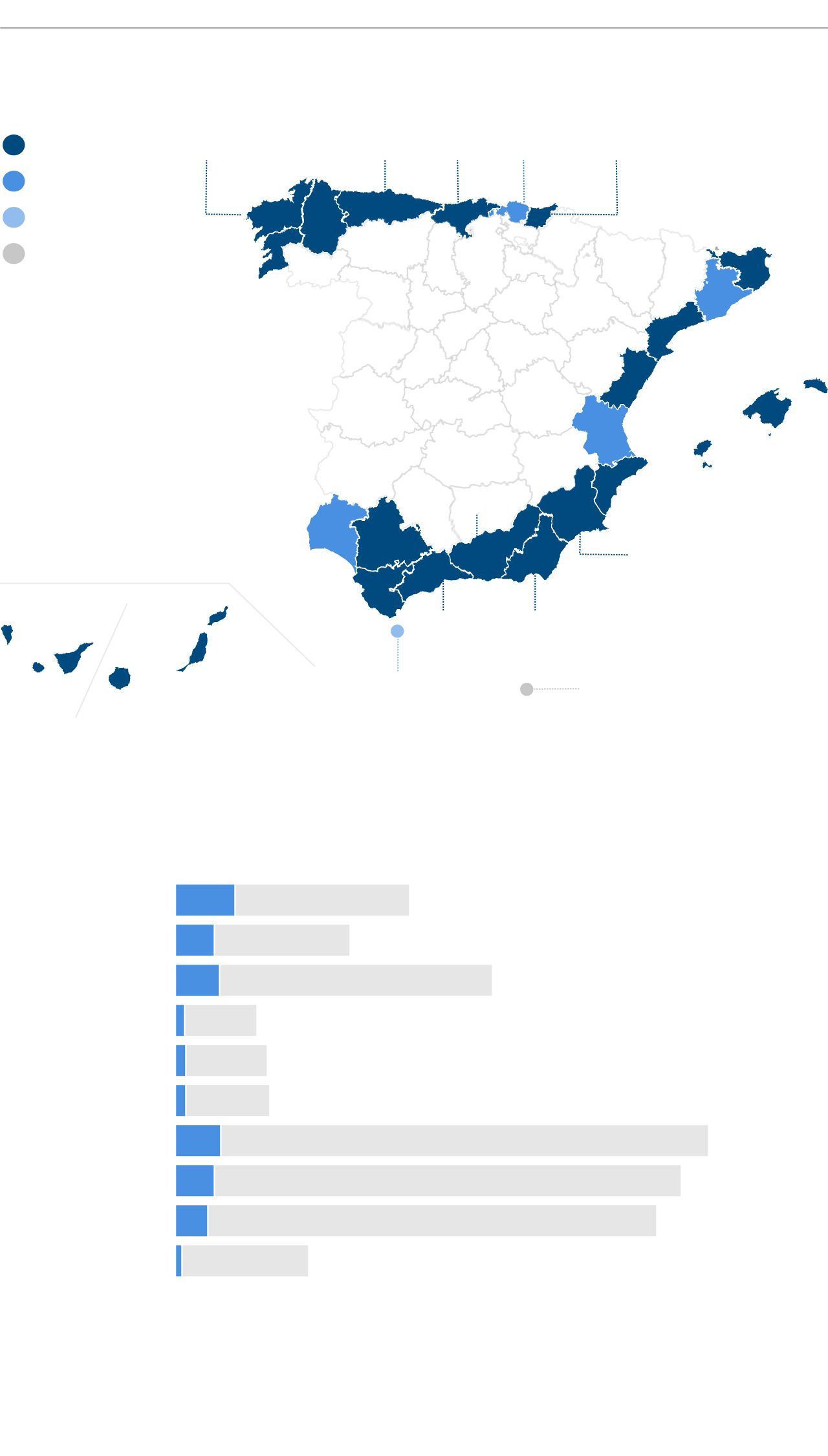 Percentage of demarcated coastline, by province

Percentage of urbanized coastline over the total, by Autonomous Communities

Percentage of urbanized coastline on

The extension deadlines that ranged from 75 extra years for, for example, “homes and associated areas” to 50 years for “economic exploitation” through 30 years for “restoration businesses”.

Ribera attributed a large part of this “disorder” to the amnesty brought about by the 2013 reform of the Coastal Law and its 2014 regulations. The decision favored in the short term – with an eye on 2018 – more than a thousand homes of the 11,000 placed in the public domain. And to another 23,000 infrastructures, including 3,000 beach bars that were going to see their permits finished, according to the Executive of the Popular Party.

This resource was used in 2016 by the Government chaired by Mariano Rajoy to extend the license of a factory of the ENCE company located in the Pontevedra estuary. The Executive, already in office after the general elections of December 2015, decided to extend the permit for the wastebasket by 60 years, until 2073. The National Court overturned that resolution through three rulings during 2021. The case is pending appeal to the Supreme Court .

It is also intended to eliminate the type of 50-year permit to occupy the coast that the present regulation grants to “uses that perform a function or provide a service that, by their nature, requires the occupation of the maritime-terrestrial public domain.” The general term will remain in 30 years.

2. The dunes and the waves

The new rule will, in fact, facilitate that more surface and elements are incorporated into that maritime-terrestrial space that is protected. For example, the project includes (legally) as an element of the beaches almost any dune. It only leaves out those that have been isolated “land within”.

Now there is a whole legal typology of dunes that, in the end, ensure that these isolated dunes have not been considered within the reserved public domain, but also all those that were defined as “stable” which means that they have shrubs or trees “in more of 75% of its surface “. These are not considered necessary to “defend the coast.”

The importance of the dunes as a barrier to sea storms, multiplied by the effects of the climatic crisis, has become highly visible in the face of extreme events, such as the storm Gloria on the Mediterranean coast. Only the restoration of three kilometers of coastline to the south of Valencia is going to take nine million euros. Among the actions, the replacement of a dune cord lost by urbanization is planned.

Another example, this one in the Atlantic, is the retreat towards the destruction of the defense of dunes that protects the Doñana Natural Area, according to the study that justified, precisely, the demarcation of the public domain of 17 kilometers of coastline on the edge of the Park National. This dune system, called El Abalario, is of “enormous environmental fragility”, according to this technical study. And a portion was not included in that armored strip of coastline.

In addition, with the future regulation it is enough to measure the maximum level that the waves reach to say: this is a beach (and therefore public domain) that must be preserved and forces to control what can rise there. At the end of the day, that domain has to serve as a barrier against these marine attacks. The current standard establishes a measurement system whereby this maximum level had to be repeated five times in five years to mark the included coastline.

3. Cars along the coast

It is noteworthy that, while currently the regulations do contemplate the construction of roads that run parallel to the protected coastal area provided that they present an average traffic intensity of more than 500 cars per day, the review now in process expressly prohibits this type of road .

In this sense, the circulation and parking of vehicles in the entire public domain will be prohibited if they are not authorized, when now they are only prohibited on the beaches.

Regarding the neighboring urban planning, although the text still in force indicates that in that area of ​​influence of the domain “the formation of architectural screens should be avoided”, the new version specifies much more what this means: “That the disposition and height of the buildings “it is carried out” in a harmonious way with the surroundings, without limiting the visual field or breaking the harmony of the coastal landscape or disfiguring its perspective “.

The climate crisis has scientifically proven effects on the coastline: rise in sea level, increased erosion, intrusion of salt water into aquifers and increased extreme coastal weather events. A country with as much coastline as Spain is especially vulnerable. And even more so with so many kilometers on the façade of the Mediterranean.

With that idea, the Climate Change law dedicate a specific article to the maritime-terrestrial public domain that requires increasing the resilience of the coast to the effects of climate change and taking this phenomenon into account in coastal planning.

With this mandate, the regulation demands that, when granting concessions, the new climatic context be taken into account because the coastline “is not only a collective, environmentally fragile and valuable heritage, but also constitutes the portion of our territory most exposed to the effects of climate change “.