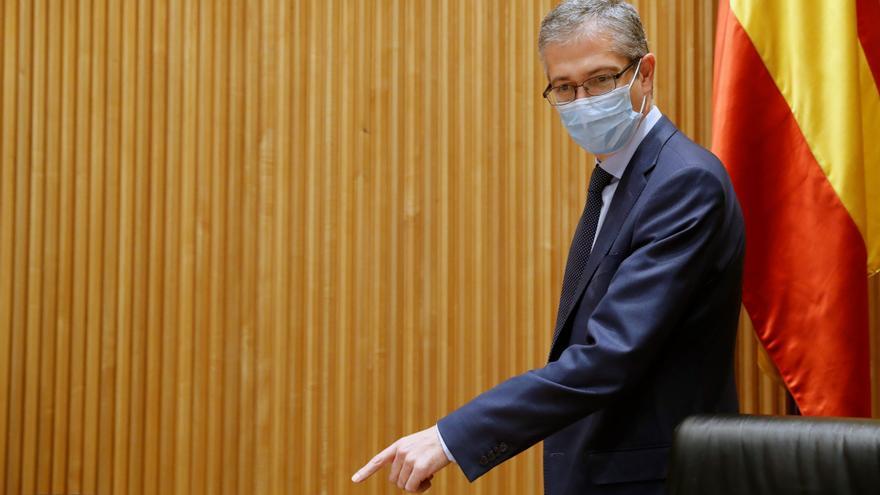 The governor of the Bank of Spain, Pablo Hernández de Cos, has appeared this Tuesday in the Congress of Deputies to present the organism’s annual report and analyze the economic crisis opened by the coronavirus pandemic. The head of the Spanish financial supervisor has urged “not to become complacent” in any economic sector and in public policies in the face of the “permanent” effects that a “temporary shock” such as the pandemic can have.

The appearance has focused on the financial sector, at a time when profitability problems and ECB policies are encouraging mergers between banking entities. It has already been the case of Bankia and CaixaBank and this week it was known that Liberbank and Unicaja have resumed their contacts for a possible union. The governor has warned that the situation in the economy “is going to exacerbate the profitability problems” that the banking sector has had in recent years. “The entities must be absolutely pending and emphasize the improvement of efficiency: reduce costs and investment in digitization”, he emphasized.

In his analysis of the Spanish financial system, Hernández de Cos has emphasized that “evidently the sector is in a better situation” than at the beginning of the previous crisis, but he has warned that “we must not be complacent because the foreseeable deterioration is going to be significant in the solvency”. Therefore, he assured that “we have to avoid at all costs that a crisis that began as a health and is already economic, is a financial crisis.” “The level of resistance of the banking system is very outstanding but we must not rule out the most severe scenarios,” he had an impact, pointing out, yes, that a European response should be committed.

Regarding the trend towards bank mergers that is being experienced both in Spain and at the European level, Hernández de Cos has requested that “they can be a mechanism to strengthen the entities and the system.” He stressed that the role of the Bank of Spain will be to “supervise the viability” of these unions and that the operations “serve to strengthen the system.” “We will judge the operations against the public policy objectives that we have assigned: to ensure solvency and financial stability,” he remarked.

In response to the deputies’ questions about the concentration in the financial sector, Hernández de Cos has acknowledged that it is a process that is being developed due to the low profitability of the sector. He has pointed out that this will mean the loss of branches and employment but has considered it necessary to avoid branches “with excess capacity.” Hernández de Cos has denied that excessive concentration levels are taking place and has justified it by pointing out that the monetary policies applied by the ECB have a quick response from the sector.

The governor of the Bank of Spain has assured that the mergers that arise will have to be analyzed “one by one”. Thus, he has emphasized that it will be evaluated first if profitability improves and that there are synergies in the union. “If there are no synergies, profitability is not improved and we would have a larger entity that is more difficult to supervise,” he said. “We are going to see a reduction in branches and employment. It is dangerous to maintain entities that are oversized”, although he has conceded that the concerns “are legitimate.”

In addition, the governor has once again positioned himself against public banks, questioned about the fact of the privatization of Bankia. He pointed out that the question should be “why do you want a public bank”, to which he pointed out that if it is about the credit reaching all strata of the population, he has remarked that if it does not arrive it is “because it is a very high risk “. “As a supervisor of private banking and eventually of public banking, my answer is a resounding no because it will generate a stability problem,” he said.

He has also charged against the possibility that a specific tax may be introduced for banking. “It is important to see who is going to pay it,” he assured. If it is transferred to users, he explained, in the end it would be the citizens who pay it, which would contrast with the initial objective. If they are not transferred and the banks pay for it, “with the profitability of the sector”, it would be “a concern for financial stability, which in turn generates economic instability.”

The European Banking Authority (EBA, for its acronym in English) has warned this week, in line with the speech of the governor of the BAnco of Spain, that “early signs” of deterioration in the quality of banks’ assets are beginning to appear , given the increase in risk costs and the downward trend in profitability, according to its quarterly report on the risks of the European Union banking system, published this Monday. “While the capital ratios remained good, there are indications that the crisis is beginning to have an impact on the quality of the assets. With a cost of risks on the rise, profitability continues its downward trend,” said the body chaired by the Spanish José Manuel Campa.

Calls for a better focus on the granting of economic stimuli

Regarding the economic situation, Hernández de Cos has assured that “it is essential” to maintain the support measures to avoid that a “temporary shock does not generate permanent effects.” “The premature withdrawal of the stimuli would have costs that exceed those of maintaining them over time,” he remarked during his presentation in the lower house. Although, it adds a nuance, by asking that it focus on the viable and most affected sectors. “Economic policy cannot (and must not) sustain indefinitely a sector that is structurally going to reduce its level of activity,” he pointed out. Thus, he pointed out that it is “a difficult combination” between maintaining stimuli and adapting the productive fabric.

Hernández de Cos has focused on the stimulus measures that have been applied, such as moratoriums or ICO lines. However, it has warned about the latter that, despite its positive impact, it can generate an “over-indebtedness” in companies, which translates into an element of financial fragility in the future. “It could lead to a deterioration of solvency in the most affected sectors,” he stressed. For this reason, it has proposed that measures that do not entail indebtedness, such as temporary capital injections in companies, be introduced. In addition, he has called for an “orderly exit” of companies with “non-viable models”.

The governor of the Bank of Spain has defended that “it is not the moment to begin now with the procedure of fiscal consolidation”. Thus, although he considers it “fundamental”, he has emphasized that it must occur when “the economic recovery is solid.” Of course, he has requested that the design of this fiscal consolidation be carried out “today” to gain credibility.

At this point, the governor has once again defended the need for structural reforms in the face of economic problems that already existed before the current economic crisis. In this sense, he has argued that the European recovery fund can allow undertaking these reforms. “We must identify projects with the capacity to increase growth and use the funds to encourage structural reforms,” ​​he emphasized. Although, he recalled that “the reforms require very broad consensus and rest on long-term programs.”