A new network of bus lines to connect the different autonomous communities, with fewer municipalities with stops and with transfer of services from the State to the autonomous communities. The Ministry of Transport, Mobility and Urban Agenda has drawn up a new map of concessions, of bus network corridors, which entails changing a contract structure that, in some cases, dates back a century and is no longer efficient or profitable .

Competition sets its sights on road transport: “It cannot be that there are 100-year concessions”

From the outset, the number of contracts, of bus concessions with private companies, is reduced from 79 to 22, the same number of corridors that, if the Ministry’s proposal goes ahead, could be operational as of 2024, when it is expected that contracts are on track, which have to be put out to public tender.

These 22 corridors, their structure and their stops, appear in a preliminary work document, prepared by INECO, which depends on the Ministry and is in charge of engineering and transportation consulting; and by the General Directorate of Land Transport. The document, to which elDiario.es has had access, is dated mid-April and constitutes a starting point for this process. From now on, according to sources from the portfolio headed by Raquel Sánchez, a consultation period is opened with each of the autonomous communities, which can be extended for months, until an agreement is reached between the different administrations.

The Transport approach entails having a smaller state network of bus service concessions, which goes from 966 to 510 routes, with an average of six stops for each one (half that currently), which means reducing from 238 to 165 million the number of buses that circulate on the roads providing these mobility services between communities and that cuts the number of municipalities with stops from 1,912 to 485. However, the number of citizens served is not reduced to the same extent, since it would go from 28.5 to 25.2 million people. However, the average population of a municipality with a stop would go from 14,900 to more than 51,000 inhabitants. As for rates, a 30% price reduction is expected.

In this way, what is sought with this proposal for a bus network, explains Transportes, is to connect provincial capitals of different autonomous communities, large towns or ‘hubs’. For example, it is planned that the corridors that pass through Madrid include the Madrid-Barajas airport as a stopping point.

On the other hand, transport between localities within the same autonomous community will remain in the hands of the regional administration, which will be in charge of defining how the mobility service is designed from the towns to the stops that appear in those 22 corridors. In exchange for providing this service, the Government is working on possible compensation mechanisms that provide financing to regional governments.

“Currently, there are stops with less than 200 passengers a year,” sources from the Ministry of Transport justified on Wednesday. “But there is not going to be any place in the emptied Spain that now has a bus service that in the future will no longer have a mobility service,” they stressed, even if the service is not provided with a bus. “It can be car sharing or flexible systems. With the technology that we now have at our disposal we can match supply and demand.”

In that presentation by the Ministry and INECO it is broken down that, when designing these 22 corridors, sociodemographic and territorial criteria have been taken into account, as well as stopping points that are tractors and trip generators, facilitate provincial mobility and connections of the bus network with the train and the plane. 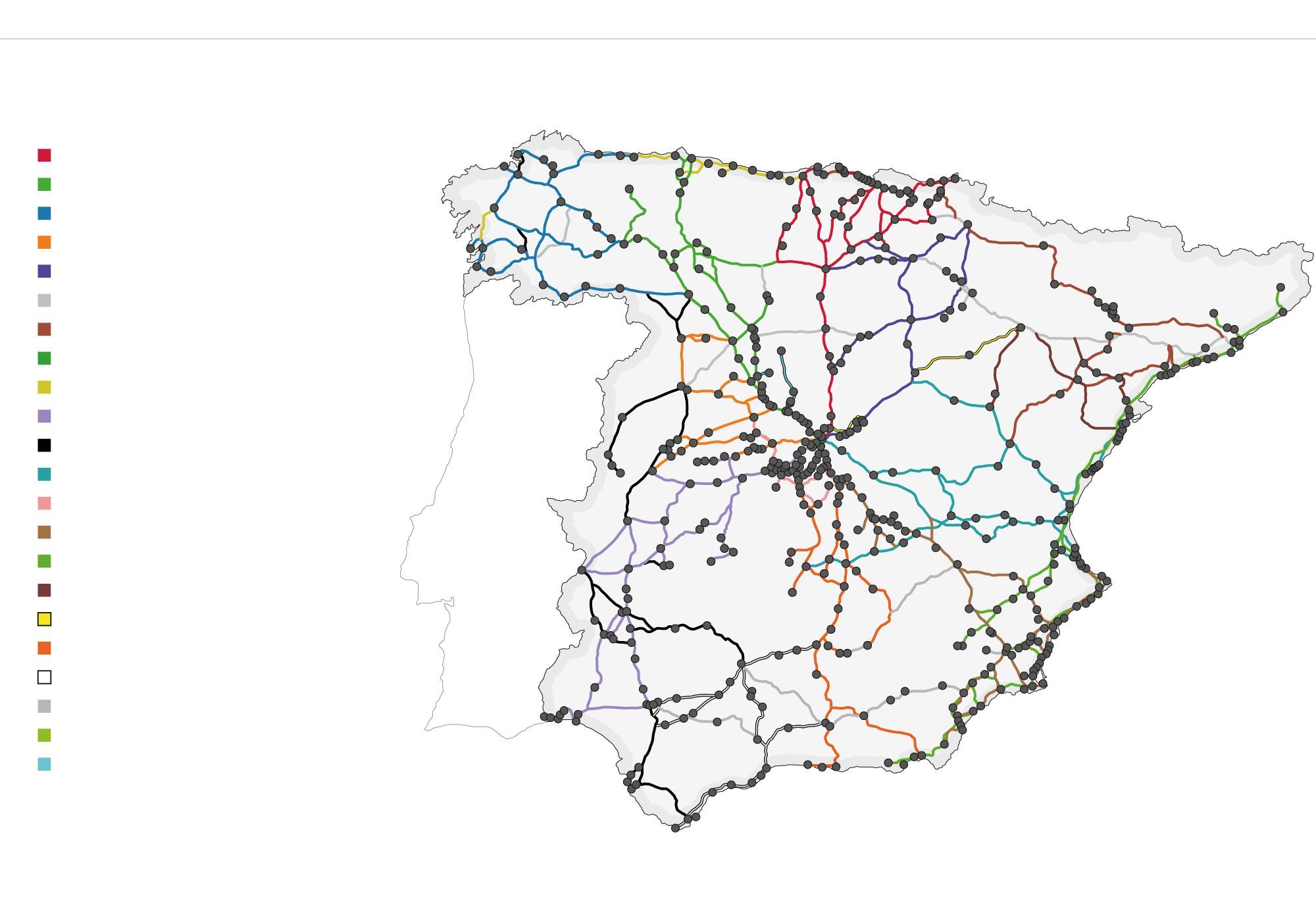 Proposal for the reorganization of regular bus services

Proposal for the reorganization of the

The design of the 22 corridors

In addition, regarding the criteria for designing the service of each corridor, it has been taken into account that inter-autonomous traffic be included exclusively, but that allow interchange nodes, between state and regional services in the same station or bus stop, in addition to the aforementioned intermodality with trains, for example.

On the other hand, not excessively long routes have been sought, less than 750 kilometers, except in cases of high demand. The headers have to be, according to this proposal, in provincial capitals or main cities. Meanwhile, the intermediate stops, in main towns within each corridor. In addition, the option of establishing stops on demand is included, at points with a demand of between 500 and 1,000 passengers per year.

Within this initial proposal, on which the communities will negotiate and on which the specific concessions will be established, there are short-distance routes. For example, between Madrid and Segovia, where 12 different routes and stops in municipalities such as San Rafael, Guadarrama or Las Rozas are contemplated; and also at the Barajas airport or on public university campuses, such as the Complutense; or private, such as the European University. The 12 proposed routes total 1,199 kilometres.

In contrast, the Mediterranean corridor, from El Ejido to Girona, includes 46 routes totaling 12,969 kilometres; the most extensive, and planned stops in Lleida, Barcelona, ​​Tarragona, Castelló de la Plana, València, Alicante, Murcia, Almería; in addition to the airports of Valencia, Alicante, Barcelona-El Prat and Almería, among others.

Another of the routes that exceeds 12,000 kilometers is the North-Northeast corridor, which includes the urban areas of Santander, Bilbao, San Sebastián, Irún, Vitoria, Logroño, Pamplona, ​​Zaragoza, Huesca, Teruel, Lleida, Barcelona, ​​Tarragona and Reus. , among the 169 stops included in this corridor.

Although one of the reasons for changing the old design was that it was designed through “non-functional relationships”, with an excessively centralist design, the majority of corridors –14 out of 22– keep Madrid as their starting or finishing point. In fact, one of the corridors with the most stops is the Madrid-Toledo, with 291 stops (only surpassed by the Mediterráneo and the Plata), and runs through the areas of Madrid, Toledo and Ávila.

How much news would you not have known if elDiario.es did not exist? If you think our work matters, help us.