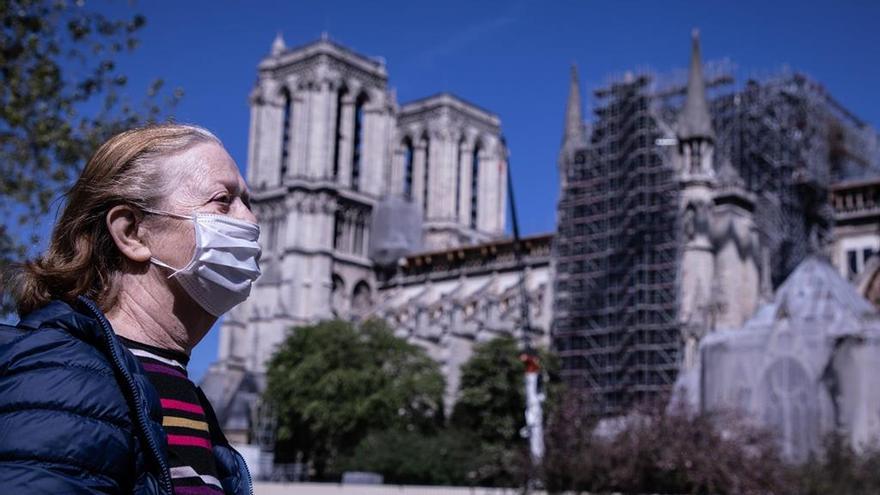 The city of Paris and its suburbs will enter the maximum alert zone as of this Monday, the phase prior to the state of sanitary emergency, that is, to a confinement like the one experienced in March. The alert system designed by the French government establishes three zones – alert zone (or red zone), reinforced alert (very red) and maximum alert (scarlet) – depending on the incidence rate and the percentage of patients with Covid- 19 in the ICU. In this way, a region is declared scarlet when it surpasses three indicators: an incidence rate of 250 cases per 100,000 inhabitants in the last seven days, an incidence of 100 cases per 100,000 in those over 65, and 30% of ICU beds occupied by coronavirus patients. Until now, only Marseille and the island of Guadeloupe had evolved into high-alert zones, experiencing severe restrictions such as the closure of bars and restaurants. Today Paris is stained in scarlet and, for the next 15 days, the bars of the capital will remain closed while the restaurants will be able to open following a sanitary protocol.

The announcement does not come as a surprise: last Thursday, the Minister of Health, Olivier Véran, announced that the Paris region had already exceeded the scarlet indicators, thus meeting all the requirements to enter the maximum alert phase. Even so, the government extended the decision until Sunday night in a desperate attempt to circumvent drastic restrictions and thereby avoid the discontent that has been experienced in Marseille in recent days. “We are in a phase of aggravation” warned Olivier Véran. “The number of coronavirus infections doubles approximately every 15 days.” And the spread of the virus is not only a concern in Paris, but also in cities such as Marseille, Bordeaux or Lyon, among others. At the national level, the data worries As the weeks go by: the positivity rate of the tests is 8.2%, there are more than 1,300 active outbreaks and this Saturday the country broke a new record of 16,972 new infections and 49 deaths from Covid-19 in one day. Experts and doctors speak of a fragile and chaotic system, and are concerned that France will not be able to survive a second wave of the same magnitude as the first.

How did France get here?

In France there was no doubt that September would be a key month in the management of the pandemic: there was talk of a second wave, a relapse, a resurgence of the epidemic … With the return to school and the end of the holidays, the government activated a series of protocols such as the mandatory use of masks at work and in schools, as well as in the streets of Paris and other large cities such as Bordeaux or Marseille. At the end of August, Prime Minister Jean Castex pledged to carry out one million PCR tests every week and, less than a month ago, he boasted of having made France “the third most testing country in Europe.” In turn, each region has been implementing its own restrictions based on the evolution of the pandemic in each territory.

Why, despite these efforts, do hospitalizations and new infections increase week after week? Doctors and experts speak of a chaotic and alarming situation, which is intensifying in the metropolises, and attribute it to two factors: the saturation in the laboratories due to the number of tests carried out and a feeling of exhaustion among the French.

At the beginning of September, the authorities congratulated themselves on meeting the goal of carrying out around one million tests per week. The PCR tests, free and without a prescription, were made accessible to all French people. An objective that, put into practice, has had a counterproductive effect: the laboratories were saturated, with waiting lists of up to a week to get an appointment and between 10 and 15 days to obtain the test result, thus making it difficult to control the spread of the virus. In Paris, it was common to see long lines of people at Covid-19 diagnostic points located around the city.

“It’s too long,” explains Dr. Jimmy Mohamed to elDiario.es. “During these days of waiting we were unable to cut the chain of infections, we lost control of the virus and this is where the problems begin.” To try to unblock the system, and after multiple complaints from doctors and laboratories, the Ministry of Health launched a prioritization protocol in which those with a prescription, people who present symptoms, vulnerable people and health professionals have preference to do so. the test.

Even so, according to Dr. Mohamed the initiative has not been enough. “We would need between 24 and 48 hours to obtain a result and proceed with the contact tracing. In regions like Brittany, for example, there has been an improvement and they get results after three days maximum. But in areas where the virus is rampant, such as Paris, the delay is still much higher. We should stop addressing the pandemic at the national level and understand that it is a problem of territories and metropolises. ”

Dr Bernard Huynh, a member of the French Federation of Doctors and president of the Paris Doctors’ Union, agrees with Jimmy. “Between putting on a mask and arriving at the ICU there is a system that does not work,” Huynh explained to this newspaper. “It is not that there is a lack of resources in the hospitals, but that the means to control the epidemic are insufficient. It is a situation of total chaos ”.

A second wave more difficult to manage than that of March

Jimmy Mohamed is a general practitioner in Paris. When he is not in the office attending to his patients, he can be heard on Europe 1 —One of the leading radio stations in France— where he co-hosts a health and wellness program. Since the pandemic began, her appearances in the media have become more and more frequent and she insists on the need to do pedagogy.

Last week, Jimmy Mohamed and other doctors and academics in the country warned in an open letter in Le Journal De Dimanche, a leading newspaper in the country, that the second wave “will be much more difficult to manage in hospitals and intensive care units than the first” and called for the implementation of drastic measures, as well as responsibility on the part of citizens.

“We are facing a fragile system that will not be able to survive a wave of the same magnitude as the one in March,” insists Jimmy to elDiario.es. “In the Paris region, more than 30% of ICU beds are occupied by Covid-19 patients, and we are only at the beginning of October.” According to Mohamed, there is a feeling of tiredness among the French: “every time the government takes a measure, no matter how justified, it is experienced as a violation of freedoms. You have to understand that they are protective measures. We must act now to avoid a catastrophic situation ”.

Not a few experts believe that the authorities have failed to keep the French under surveillance. Dr. Bernard Huynh is even more critical: “there is a very intense social unrest and a lack of confidence of the people in the decisions of the government, in large part due to the lack of clarity in their speech and for taking decisions little anticipated, without analyze its consequences, resulting in an ineffective system ”.

Crisis in Marseille and indignation among restaurateurs

Marseille, the second largest city in France, was declared a maximum alert zone on Monday, September 28. The city’s bars and restaurants were forced to close, and the measures sparked a wave of protests among citizens and restaurateurs, as well as tensions between the Marseille city council and the French government. The measures were appealed, but the Marseille administrative court dismissed the appeal and backed the decision to close bars and restaurants for two weeks.

Following the announcement that Paris and other cities were following in the footsteps of Marseille, owners of bars and restaurants in Paris and Bordeaux protested simultaneously against the restrictions last Friday. In Bordeaux, chef Philippe Etchebest led the protests and established himself as the national spokesperson for the sector in a pan in front of his premises: “I do not speak only for myself, but for all professionals in France, for restaurants, establishments, premises and cafes that are currently closed or in the process of closing. We cannot close, it will kill us ”.

In the French capital, the prospect of having to shut down completely alarmed the entire industry en masse. “Economically it is a catastrophe” says Bernard, owner of the Brasserie Le Rousseau in the Saint-Germain-des-Prés neighborhood, one of the most emblematic and wealthy in Paris. “I think there are other solutions to avoid total closure, such as doing only the midday service. It’s been a week since we stopped serving alcohol at 10pm… We will do what they tell us, but I think there are alternatives ”. Resigned, Bernard could not attend the demonstration last Friday. “I can’t afford to close the restaurant. Since we reopened at the beginning of summer we have 30% fewer clients ”. Unlike bar owners, resigned to closing, Bernard will be able to sleep peacefully, as Le Rousseau will remain open until 10pm, although with a new health protocol for customers and workers.

Seeing that the number of infections was increasing, the French government updated its alert system on September 23, delimiting new alert zones based on three criteria: the general incidence rate, the incidence rate in people over 65 and the percentage of ICU beds occupied by Covid-19 patients. Each zone carries a series of restrictions.