We are currently going through the biggest bullish cycle in terms of time compared to previous cycles. Let’s take a look at the most promising altcoins for years to come. They are part of the third generation of cryptocurrencies, being the bitcoin of the first generation and ethereum of the second generation.

Solana has a platform similar to Ethereum, which allows the construction of Decentralized Applications (Dapps), NFTs, games and more, its token is the SOL.

Launched in March 2020, Solana uses as a consensus protocol Proof of History (PoH), differentiates it from Proof of Stake (PoS) as ETH 2.0 (in transition) or Proof of Work (PoW) as it uses Bitcoin.

Earlier this year, SOL was being traded for approximately US$3.5, reaching today US$255, an appreciation of %7185 in less than a year.

The interesting thing about Solana is that in addition to running on several sets such as decentralized finance (DeFi), they are very present in the games, one of them being the most famous Star Atlas, a metaverso NFT virtual game built inside Solana, the game will only be released in 2022, which could have a big influence on SOL’s price for the coming months.

Despite being very new in the market, it still has a lot to build and improve, Solana has a great future ahead, especially for its applications.

Polkadot has individual blockchains that are called parachains (parallel blockchains) and a main blockchain that receives the name of Relay Chain, with the objective of exchanging information with great ease and thus being able to develop more powerful services and applications.

Launched in 2020, the consensus system used is the NPoS (Nominated Proof of Stake), similar in many respects to the PoS (Proof of Stake), a mechanism used by cryptos such as Cardano.

Earlier this year, the DOT cryptocurrency was trading for around US$ 10, now in November, just a few days ago it reached the value of US$ 56, a 460% appreciation in less than a year, today it occupies the 8th # place with the highest market capitalization, with US$49 billion. 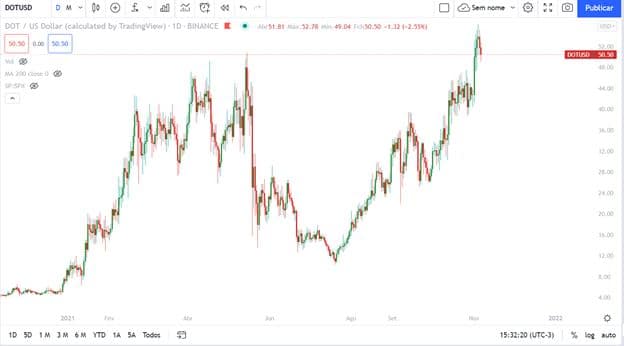 Despite the short time it has on the market, it shows promise, and it is certainly a project worth following in the long run, applications will appear more and more and this would be a boost in usability, but in price.

Cardano has a platform based on smart contracts, and allows the development of dApps (decentralized applications), as every platform has its own token, in this case it is ADA.

Launched in 2017 by Charles Hoskinson, co-founder of Ethereum and BitShares, cryptocurrency uses it as a consensus protocol PoS (Proof of Stake), an English term that means proof of participation.

In January of this year, the THERE IS was trading at $0.35 and went to $3 in September, appreciated almost 1000% in just 9 months, and reached a market capitalization of approximately $95 billion. 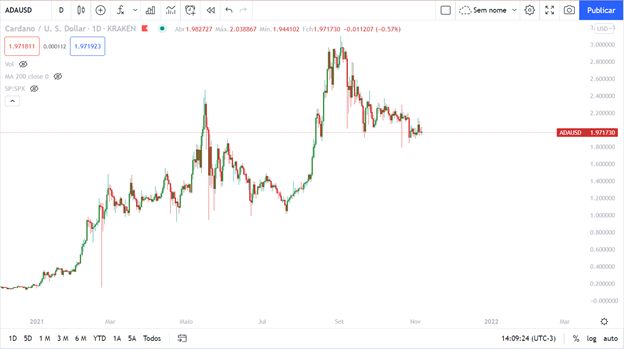 Today, Cardano (ADA) is trading for about $2, and is ranked 6th with the highest market capitalization, with a total market value of $65 billion, according to the CoinMarketCap website.

Many are betting on Cardano, and for sure, once the applications are running within it, it will have a much higher valuation, it is a good project to have in the portfolio in the long term.

Despite all of them emerging as competitors of Ethereum, the second largest cryptocurrency in terms of market capitalization and usability, they can be very good alternatives in terms of scalability and transaction fees.

Certainly Ethereum is already consolidated in the market, but that doesn’t mean that people in the future won’t opt ​​for better alternatives, like the ones that promise these altcoins.